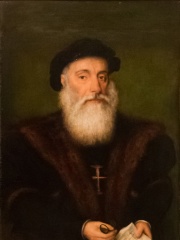 Vasco da Gama, 1st Count of Vidigueira (; European Portuguese: [ˈvaʃku ðɐ ˈɣɐ̃mɐ]; c. 1460s – 24 December 1524), was a Portuguese explorer and the first European to reach India by sea.His initial voyage to India by way of Cape of Good Hope (1497–1499) was the first to link Europe and Asia by an ocean route, connecting the Atlantic and the Indian oceans. This is widely considered a milestone in world history, as it marked the beginning of a sea-based phase of global multiculturalism. Read more on Wikipedia

Vasco da Gama is most famous for being the first European to sail around Africa to India.

Among explorers, Vasco da Gama ranks 4 out of 405. Before him are Marco Polo, Christopher Columbus, and Ferdinand Magellan. After him are Amerigo Vespucci, Bartolomeu Dias, Roald Amundsen, Ibn Battuta, James Cook, Hernán Cortés, Zheng He, and Francis Drake.