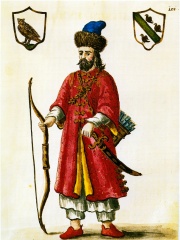 Marco Polo ( (listen), Venetian: [ˈmaɾko ˈpolo], Italian: [ˈmarko ˈpɔːlo] (listen); c. 1254 – 8 January 1324) was a Venetian merchant, explorer and writer who travelled through Asia along the Silk Road between 1271 and 1295. His travels are recorded in The Travels of Marco Polo (also known as Book of the Marvels of the World and Il Milione, c. Read more on Wikipedia

Marco Polo was a Venetian merchant and explorer who traveled to China in the 13th century. He is most famous for his accounts of his travels, which were published in the book "The Travels of Marco Polo."

Among people born in 1254, Marco Polo ranks 1. After him are Osman I, Charles II of Naples, Marie of Brabant, Queen of France, Zhao Mengfu, Floris V, Count of Holland, and Dmitry of Pereslavl. Among people deceased in 1324, Marco Polo ranks 1. After him are Malhun Hatun, Marie of Luxembourg, Queen of France, Emperor Go-Uda, Henry II of Jerusalem, Hedwig of Holstein, Irene of Brunswick, and Dino Compagni.