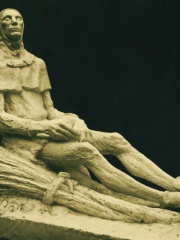 Guillaume Cale (sometimes anglicized to William Kale, also known as Guillaume Caillet, popularly known as Jacques Bonhomme ("Jack Goodfellow") or Callet) was a wealthy peasant from the village of Mello near Beauvais, who became leader of the peasant Jacquerie which broke out in May 1358 and continued for a month unchecked until the Battle of Mello on 10 June. Read more on Wikipedia

Among people born in 1350, Guillaume Cale ranks 14. Before him are Margaret III, Countess of Flanders, John I of Aragon, Pierre d'Ailly, Ivan Shishman of Bulgaria, Inca Roca, and Urus Khan. After him are Agnolo Gaddi, Leonor Teles, Qara Osman, Hrvoje Vukčić Hrvatinić, Anna of Trebizond, and Spinello Aretino. Among people deceased in 1358, Guillaume Cale ranks 5. Before him are Isabella of France, Albert II, Duke of Austria, Ashikaga Takauji, and Étienne Marcel. After him are Abu Inan Faris and Giovanni de' Marignolli.

Among SOCIAL ACTIVISTS In France