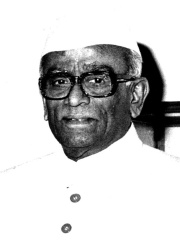 Neelam Sanjiva Reddy pronunciation (19 May 1913 – 1 June 1996) was an Indian politician who served as the sixth president of India, serving from 1977 to 1982. Beginning a long political career with the Indian National Congress Party in the independence movement, he went on to hold several key offices in independent India—as the first Chief Minister of Andhra Pradesh, a two-time Speaker of the Lok Sabha and a Union Minister—before becoming the youngest-ever Indian president.Born in present-day Anantapur district, Andhra Pradesh, Reddy completed his schooling at Adayar and joined the Government Arts College at Anantapur. He quit to become an Indian independence activist and was jailed for participating in the Quit India Movement. Read more on Wikipedia

Among politicians, Neelam Sanjiva Reddy ranks 7,946 out of 15,710. Before him are René Duguay-Trouin, Ngô Đình Nhu, Infanta Maria of Guimarães, Ibrahim Muteferrika, Viacheslav I of Kiev, and Krishnadevaraya. After him are Eurycratides, Naropa, Constantine II of Scotland, Margaret of Navarre, Dorieus, and Adib Shishakli.