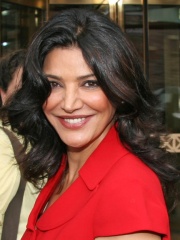 Shohreh Aghdashloo (Persian: شهره آغداشلو, pronounced [ʃohˈɾe ɒɢdɒʃˈluː]; born Shohreh Vaziri-Tabar (شهره وزیری‌تبار); May 11, 1952) is an Iranian-American actress. Following numerous starring roles on the stage, she made her film debut in Shatranje Bad (The Chess Game of the Wind) (1976), directed by Mohammad Reza Aslani. Her next two films Gozāresh (The Report) (1977), directed by Abbas Kiarostami and Sooteh Delan (Broken-Hearted), directed by Ali Hatami, received critical acclaim and established her as one of Iran's leading actresses. After establishing a theatre and film career in Iran, Aghdashloo moved to England during the Iranian Revolution in 1979, subsequently becoming a U.S. Read more on Wikipedia

Among ACTORS In Iran