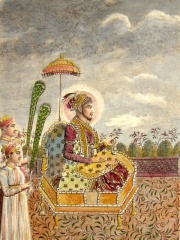 Shah Alam II (Persian pronunciation: [ʃɑːh ɑːlam]; 25 June 1728 – 19 November 1806), also known by his birth name Ali Gohar (or Ali Gauhar), was the seventeenth Mughal Emperor and the son of Alamgir II. Shah Alam II became the emperor of a crumbling Mughal empire. His power was so depleted during his reign that it led to a saying in the Persian language, Sultanat-e-Shah Alam, Az Dilli ta Palam, meaning, 'The empire of Shah Alam is from Delhi to Palam', Palam being a suburb of Delhi.Shah Alam faced many invasions, mainly by the Emir of Afghanistan, Ahmed Shah Abdali, which led to the Third Battle of Panipat between the Maratha Empire, who maintained suzerainty over Mughal affairs in Delhi and the Afghans led by Abdali. In 1760, the invading forces of Abdali were driven away by the Marathas, led by Sadashivrao Bhau, who deposed Shah Jahan III, the puppet Mughal emperor of Imad-ul-Mulk, and installed Shah Alam II as the rightful emperor (1760 – 1772).Shah Alam II was considered the only and rightful emperor, but he was unable to return to Delhi until 1772, under the protection of the Maratha general Mahadaji Shinde. Read more on Wikipedia