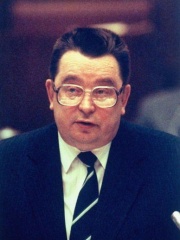 Valentin Sergeyevich Pavlov (Russian: Валéнтин Серге́евич Па́влов; 27 September 1937 – 30 March 2003) was a Soviet official who became a Russian banker following the dissolution of the Soviet Union. Born in the city of Moscow, then part of the Russian Soviet Federative Socialist Republic, Pavlov began his political career in the Ministry of Finance in 1959. Later, during the Brezhnev Era, he became head of the Financial Department of the State Planning Committee. Read more on Wikipedia

Since 2007, the English Wikipedia page of Valentin Pavlov has received more than 140,719 page views. His biography is available in 25 different languages on Wikipedia making him the 4,875th most popular politician.

Among politicians, Valentin Pavlov ranks 4,846 out of 14,801. Before him are Ilona Zrínyi, Zhao Mengfu, António Ramalho Eanes, Peter, Duke of Coimbra, Archduke Rainer Joseph of Austria, and Hassan Nasrallah. After him are Kiril, Prince of Preslav, Roger Mortimer, 1st Earl of March, Victor Klemperer, Marc Ravalomanana, Sophie Magdalene of Brandenburg-Kulmbach, and Simeon Uroš.