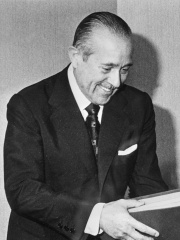 Carlos Arias Navarro, 1st Marquis of Arias-Navarro (11 December 1908 – 27 November 1989) was one of the best known Spanish politicians during the dictatorship of Francisco Franco. While Arias Navarro was a moderate leader in the last phase of Francoism and the beginning of the transition to democracy, he was in fact a hard-line politician who had been involved in the White Terror, signing thousands of death warrants at the time of the dismantling of the Spanish Republic. Read more on Wikipedia

Since 2007, the English Wikipedia page of Carlos Arias Navarro has received more than 191,142 page views. His biography is available in 25 different languages on Wikipedia making him the 4,535th most popular politician.

Among politicians, Carlos Arias Navarro ranks 4,509 out of 14,801. Before him are Francesco IV Gonzaga, Duke of Mantua, Gyula Andrássy the Younger, Juan Almeida Bosque, Lajos Batthyány, Princess Margaretha, Mrs. Ambler, and Nicomedes I of Bithynia. After him are Fruela I of Asturias, Maria, Queen of Sicily, Julia Flavia, Infanta Luisa Fernanda, Duchess of Montpensier, John Spencer, 8th Earl Spencer, and Anita Garibaldi.