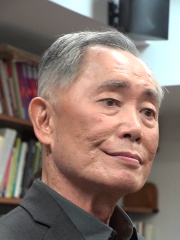 George Takei (; Japanese: ジョージ・タケイ; born Hosato Takei (武井 穂郷), April 20, 1937) is an American actor, author and activist known for his role as Hikaru Sulu, helmsman of the fictional starship USS Enterprise in the television series Star Trek and subsequent films.Takei was born to Japanese American parents, with whom he lived in U.S.-run internment camps during World War II. He began pursuing acting in college, which led in 1965 to the role of Sulu, to which he returned periodically into the 1990s. Upon coming out as gay in 2005, he became a prominent proponent of LGBT rights and active in state and local politics. Read more on Wikipedia

George Takei is most famous for being an actor and activist. He is best known for his role as Hikaru Sulu in the original Star Trek series. He also played the role of Mr. Sulu in six Star Trek movies.