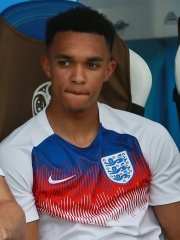 Trent John Alexander-Arnold (born 7 October 1998) is an English professional footballer who plays as a right-back for Premier League club Liverpool and the England national team. Known for his range of passing and providing assists, he is regarded as one of the best right-backs in world football.Alexander-Arnold joined Liverpool's academy in 2004 and captained the club across its youth levels. He made his senior debut in 2016, at age 18, and played in back-to-back UEFA Champions League finals in 2018 and 2019, winning the latter and being named in the Champions League Squad of the Season. Read more on Wikipedia