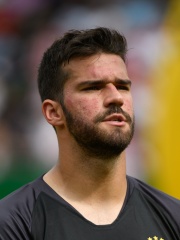 Alisson Ramses Becker (born 2 October 1992), commonly known as Alisson, is a Brazilian professional footballer who plays as a goalkeeper for Premier League club Liverpool and the Brazil national team. He is widely regarded to be one of the best goalkeepers in the world due to his crucial saves and positioning.Alisson joined Internacional's academy in 2002, progressing through the youth set up before making his senior debut in 2013. During his four years with Internacional's senior side, Alisson won the Campeonato Gaúcho title in each season. Read more on Wikipedia

Since 2007, the English Wikipedia page of Alisson has received more than 2,781,944 page views. His biography is available in 59 different languages on Wikipedia (up from 49 in 2019). Alisson is the 1,606th most popular soccer player (down from 881st in 2019), the 367th most popular biography from Brazil and the 170th most popular Brazilian Soccer Player.

Page views of Alissons by language