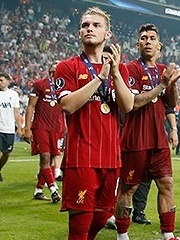 Harvey Daniel James Elliott (born 4 April 2003) is an English professional footballer who plays as a winger or midfielder for Premier League club Liverpool. Having come up through their academy, Elliott made his first-team debut for Fulham in September 2018, becoming the youngest player to play in the EFL Cup, aged 15 years and 174 days. Read more on Wikipedia

Among people born in 2003, Harvey Elliott ranks 17. Before him are Wyatt Oleff, Rayan Cherki, Alena Kostornaia, Alireza Firouzja, Lizzy Greene, and Quvenzhané Wallis. After him are Jude Bellingham, Max Charles, and JoJo Siwa.