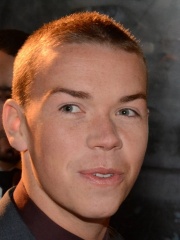 William Jack Poulter (born 28 January 1993) is a British actor. He first gained recognition for his role as Eustace Scrubb in the fantasy adventure film The Chronicles of Narnia: The Voyage of the Dawn Treader (2010). Poulter received further praise for his starring role in the comedy film We're the Millers (2013), for which he won the BAFTA Rising Star Award.Poulter also starred in the science fiction film The Maze Runner (2014) and the sequel Maze Runner: The Death Cure (2018), the period epic film The Revenant (2015) in which he portrayed legendary frontiersman Jim Bridger as a young man, the crime drama film Detroit (2017), the interactive science fiction film Black Mirror: Bandersnatch (2018), and the folk horror film Midsommar (2019). Read more on Wikipedia

Page views of Will Poulters by language

Among people born in 1993, Will Poulter ranks 67. Before him are Chanathip Songkrasin, Fred, Rosalía, Ricardo Pereira, George Ezra, and Raphaël Guerreiro. After him are Jodie Comer, Sergio Rico, Huang Zitao, Sofia Carson, Saweetie, and Danny Ward.