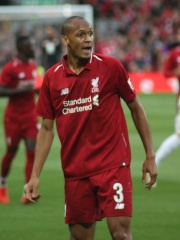 Fábio Henrique Tavares (born 23 October 1993), known as Fabinho (Brazilian Portuguese: [faˈbĩɲu]), is a Brazilian professional footballer who plays as a midfielder for Premier League club Liverpool and the Brazil national team. A versatile player who mainly plays as a defensive midfielder, Fabinho can also be deployed as a right-back or centre-back.After starting off at Fluminense, he transferred to Rio Ave in 2012. He spent his entire time there out on loan, first at Real Madrid Castilla, and made one substitute appearance for the first team. Read more on Wikipedia

Page views of Fabinhos by language