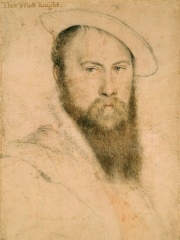 Sir Thomas Wyatt (1503 – 11 October 1542) was a 16th-century English politician, ambassador, and lyric poet credited with introducing the sonnet to English literature. He was born at Allington Castle near Maidstone in Kent, though the family was originally from Yorkshire. His family adopted the Lancastrian side in the Wars of Roses. Read more on Wikipedia

Since 2007, the English Wikipedia page of Thomas Wyatt has received more than 10,898 page views. His biography is available in 27 different languages on Wikipedia making him the 1,865th most popular writer.

Among writers, Thomas Wyatt ranks 1,861 out of 4,883. Before him are Mikhail Zoshchenko, Johann Jakob Bodmer, Eugene Nida, George Adamski, Hugh Lofting, and Daqiqi. After him are Arthur Machen, Avitus of Vienne, Mirza Shafi Vazeh, Augustus the Younger, Duke of Brunswick-Lüneburg, Fernando de Rojas, and Christopher Isherwood.