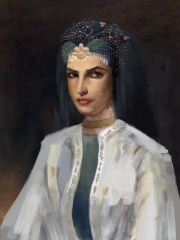 Sayyida al Hurra (Arabic: السيدة الحرة), real name Lalla Aicha bint Ali ibn Rashid al-Alami (Arabic: للا عائشة بنت علي بن رشيد العلمي) (1485 – 14 July 1561), was Hakimat Titwan (Governor of Tétouan) between 1515–1542 and a Moroccan privateer leader during the early 16th century. She became the wife of the Wattasid Sultan Ahmad ibn Muhammad. She is considered to be "one of the most important female figures of the Islamic West in the modern age".The life of Sayyida al-Hurra can be understood within geopolitical and religious contexts, particularly the struggle between Muslim and Christian empires during her lifetime. Read more on Wikipedia

Among politicians, Sayyida al Hurra ranks 7,396 out of 15,577. Before her are Ahmed Shafik, Adelaide of Paris, Prince Rupert of the Rhine, Tokugawa Ieshige, Tetricus II, and Henry Casimir II, Prince of Nassau-Dietz. After her are King Wuling of Zhao, Ashurnasirpal I, João I of Kongo, Myeongjong of Goryeo, Herbert von Bismarck, and Princess Joséphine Caroline of Belgium.