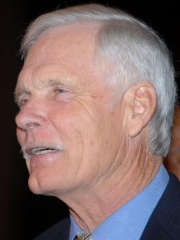 Robert Edward Turner III (born November 19, 1938) is an American entrepreneur, television producer, media proprietor, and philanthropist. As a businessman, he is known as founder of the Cable News Network (CNN), the first 24-hour cable news channel. In addition, he founded WTBS, which pioneered the superstation concept in cable television, which later became TBS. As a philanthropist, he is known for his $1 billion gift to support the United Nations, which created the United Nations Foundation, a public charity to broaden U.S. support for the UN. Turner serves as Chairman of the United Nations Foundation board of directors. Read more on Wikipedia

Ted Turner is most famous for being the founder of CNN, which was the first 24-hour news network.