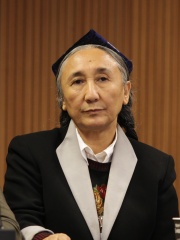 Rebiya Kadeer (Uighur: رابىيە قادىر, Рабийә Қадир; born 15 November 1946) is an ethnic Uyghur, businesswoman and political activist. Born in Altay City, Xinjiang, Kadeer became a millionaire in the 1980s through her real estate holdings and ownership of a multinational conglomerate. Kadeer held various positions in the National People's Congress in Beijing and other political institutions before being arrested in 1999 for, according to Chinese state media, sending confidential internal reference reports to her husband, who worked in the United States as a pro-East Turkistan independence broadcaster. Read more on Wikipedia