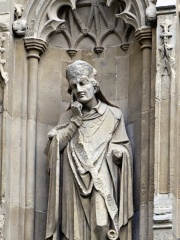 Stephen Langton (c. 1150 – 9 July 1228) was an English Cardinal of the Roman Catholic Church and Archbishop of Canterbury between 1207 and his death in 1228. The dispute between King John of England and Pope Innocent III over his election was a major factor in the crisis which produced Magna Carta in 1215. Read more on Wikipedia

Among religious figures, Stephen Langton ranks 1,458 out of 2,238. Before him are Kōdō Sawaki, Kaundinya, Arp Schnitger, Bashar ibn Burd, Joseph Cardijn, and Theophylact of Constantinople. After him are John, Old Lord of Beirut, Gershom ben Judah, Jan Sarkander, Giovanni Lajolo, Ludwig Müller, and Gaudentius of Brescia.

Among people born in 1150, Stephen Langton ranks 23. Before him are Bonanno Pisano, Peter II of Bulgaria, Urraca of Portugal, Amalric of Bena, Il-Arslan, and Conon de Béthune. After him are Vitale II Michiel, Heinrich von Veldeke, Mstislav III of Kiev, Wincenty Kadłubek, Benedetto Antelami, and Orio Mastropiero. Among people deceased in 1228, Stephen Langton ranks 6. Before him are Isabella II of Jerusalem, Stefan the First-Crowned, Robert I, Latin Emperor, Mstislav Mstislavich, and Maria of Courtenay. After him is Aimeric de Peguilhan.