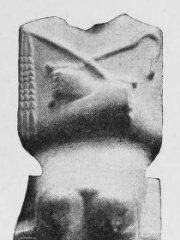 Sekhemre Shedtawy Sobekemsaf II was an Egyptian king of the Seventeenth Dynasty of Egypt who reigned during the Second Intermediate Period, when Egypt was ruled by multiple kings (he was once thought to belong to the late Thirteenth Dynasty). His throne name, Sekhemre Shedtawy, means "Powerful is Re; Rescuer of the Two Lands." It is now believed by Egyptologists that Sobekemsaf II was the father of both Sekhemre-Wepmaat Intef and Nubkheperre Intef based on an inscription carved on a doorjamb discovered in the ruins of a 17th Dynasty temple at Gebel Antef in the early 1990s which was built under Nubkheperre Intef. Read more on Wikipedia

Among politicians, Sobekemsaf II ranks 8,541 out of 15,710. Before him are Álvaro de Luna, 1st Duke of Trujillo, Margaret I, Countess of Flanders, Ahn Changho, Laura Chinchilla, Sin Sukju, and Enric Prat de la Riba. After him are Maurice Yaméogo, Bodawpaya, Automedon, Manuel II of Trebizond, Bernhard II, Duke of Saxe-Meiningen, and Dean Rusk.