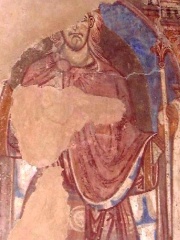 Oswald (Old English pronunciation: [ˈoːzwɑɫd]; c 604 – 5 August 641/642) was King of Northumbria from 634 until his death, and is venerated as a saint, of whom there was a particular cult in the Middle Ages.Oswald was the son of Æthelfrith of Bernicia and came to rule after spending a period in exile. After defeating the Welsh ruler Cadwallon ap Cadfan, Oswald brought the two Northumbrian kingdoms of Bernicia and Deira once again under a single ruler, and promoted the spread of Christianity in Northumbria. He was given a strongly positive assessment by the historian Bede, writing a little less than a century after Oswald's death, who regarded Oswald as a saintly king; it is also Bede who is the main source for present-day historical knowledge of Oswald. Read more on Wikipedia

Page views of Oswald of Northumbrias by language

Among religious figures, Oswald of Northumbria ranks 1,208 out of 2,272. Before him are Antipope Theodoric, Kevin Farrell, Pietro Gasparri, Shinran, Alfred Loisy, and John IV of Constantinople. After him are Shenoute, Nicholas of Japan, Stephen Harding, Edward Schillebeeckx, Barsanuphius, and Fouad Twal.