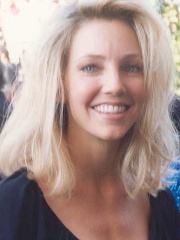 Heather Deen Locklear (born September 25, 1961) is an American actress famous for her role as Amanda Woodward on Melrose Place (1993–1999), for which she received four consecutive Golden Globe nominations for Best Actress – Television Series Drama. She is also known for her role as Sammy Jo Carrington on Dynasty from 1981 to 1989, her first major television role, which began a longtime collaboration with producer Aaron Spelling. Other notable television roles include Officer Stacy Sheridan on T. J. Hooker (1982–1986) and Caitlin Moore on Spin City (1999–2002), for which she earned two more Golden Globe nominations, this time for Best Actress – Television Series Musical or Comedy. Read more on Wikipedia