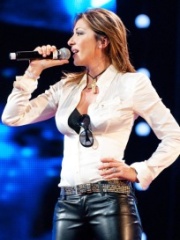 Sabrina Debora Salerno, also known as Sabrina, (born 15 March 1968) is an Italian singer, songwriter, record producer, glamour model, actress and television presenter. During her career, she has sold over 20 million records worldwide and scored 10 international hits, including 3 number ones. Internationally, she is best known for her 1987 single "Boys (Summertime Love)", which topped the charts in France and Switzerland, and peaked at No. 3 in the UK. Read more on Wikipedia

Since 2007, the English Wikipedia page of Sabrina Salerno has received more than 895,668 page views. Her biography is available in 33 different languages on Wikipedia making her the 325th most popular singer.