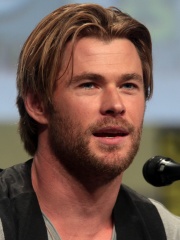 Christopher Hemsworth (born 11 August 1983) is an Australian actor. He rose to prominence playing Kim Hyde in the Australian television series Home and Away (2004–2007) before beginning a film career in Hollywood. In the Marvel Cinematic Universe (MCU), Hemsworth started playing Thor with the 2011 film of the same name and most recently reprised the role in Thor: Love and Thunder (2022), which established him among the world's highest-paid actors.His other film roles include the action films Star Trek (2009), Snow White and the Huntsman (2012), Red Dawn (2012), Blackhat (2015), Men in Black: International (2019), Extraction (2020), the thriller A Perfect Getaway (2009) and the comedy Ghostbusters (2016). Read more on Wikipedia

Chris Hemsworth is most famous for his portrayal of Thor in the Marvel Cinematic Universe.

The Guardian
Chris Hemsworth to take ‘time off’ from acting after discovering Alzheimer’s risk
The Thor actor’s predisposition to the disease was confirmed via a genetic test he undertook as part of a new TV series<ul><li>Get our weekend culture and lifestyle email</li></ul>Chris Hemsworth has discovered he has a significantly heightened risk of develo…
Kelly Burke
BBC News
Chris Hemsworth: Alzheimer’s risk prompts actor to take acting break
The Thor star has revealed he has a significantly heightened risk of developing the disease.
https://www.facebook.com/bbcnews
IGN
Chris Hemsworth Ready to 'Close the Book' on Thor
Following his announcement that he's taking a break from acting, MCU star Chris Hemsworth has also revealed he's ready to "close the book" on his time as Thor.
Logan Plant
GeekTyrant
Chris Hemsworth to Slow Down His Acting Career Since Finding His Predisposition to Alzheimer's
Actor Chris Hemsworth, best known for playing Thor in the Marvel movies, has decided to slow his acting career down since he found out that he has a predisposition to Alzheimer’s Disease. The news was revealed to Hemsworth in an episode of his new Disney+ doc…
Jessica Fisher