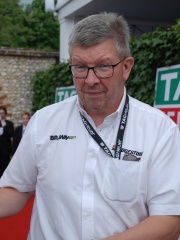 Ross James Brawn OBE (born 23 November 1954) is a British Formula One managing director, motor sports and technical director.He is a former motorsport engineer and Formula One team principal, and has worked for a number of Formula One teams. Serving as the technical director of the championship-winning Benetton and Ferrari teams, he earned fame as the "mastermind" behind Michael Schumacher's seven world championship titles. He took a sabbatical in 2007 and returned to F1 for the 2008 season as team principal of Honda. Read more on Wikipedia

Since 2007, the English Wikipedia page of Ross Brawn has received more than 731,347 page views. His biography is available in 30 different languages on Wikipedia making him the 90th most popular engineer.