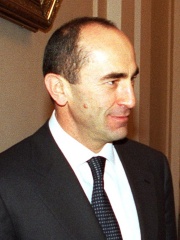 Robert Sedraki Kocharyan (Armenian: Ռոբերտ Սեդրակի Քոչարյան pronounced [rɔbɛɾt kʰɔtʃʰɑɾjɑn]; born 31 August 1954) is an Armenian politician who served as the second President of Armenia between 1998 and 2008. He was previously President of Nagorno-Karabakh from 1994 to 1997 and Prime Minister of Armenia from 1997 to 1998. During most of his presidency, between 2001 and 2007, Armenia's economy grew on average by 12% annually, largely due to the construction boom. Read more on Wikipedia

Among politicians, Robert Kocharyan ranks 4,776 out of 15,710. Before him are Maria Luisa, Duchess of Lucca, Al-Adid, Ségolène Royal, Bořivoj I, Duke of Bohemia, Denis Thatcher, and Vyacheslav Menzhinsky. After him are Odoardo Farnese, Duke of Parma, Aulus Gabinius, Sibghatullah Mojaddedi, Prince Ferdinand of Saxe-Coburg and Gotha, Infanta Marie Anne of Portugal, and Jaunutis.