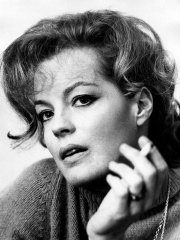 Romy Schneider (German: [ˈʁoː.mi ˈʃnaɪ̯.dɐ] (listen); born Rosemarie Magdalena Albach; 23 September 1938 – 29 May 1982) was a German-French actress. She began her career in the German Heimatfilm genre in the early 1950s when she was 15. From 1955 to 1957, she played the central character of Empress Elisabeth of Austria in the Austrian Sissi trilogy, and later reprised the role in a more mature version in Luchino Visconti's Ludwig (1973). Read more on Wikipedia

Romy Schneider is best known for her roles in the French film "La Piscine" and the American film "The Poseidon Adventure."

Among people born in 1938, Romy Schneider ranks 2. Before her is Kofi Annan. After her are Juan Carlos I of Spain, Beatrix of the Netherlands, Claudia Cardinale, Adriano Celentano, Jon Voight, Rudolf Nureyev, Queen Sofía of Spain, Leonid Kuchma, Nico, and Islam Karimov. Among people deceased in 1982, Romy Schneider ranks 5. Before her are Grace Kelly, Huang Xianfan, Leonid Brezhnev, and Ayn Rand. After her are Ingrid Bergman, Carl Orff, Arthur Rubinstein, Roman Jakobson, Henry Fonda, Philip K. Dick, and Hans-Ulrich Rudel.