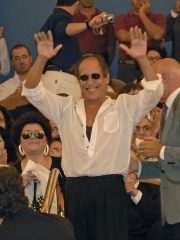 Adriano Celentano (Italian: [adriˈaːno tʃelenˈtaːno]; born 6 January 1938) is an Italian singer, songwriter, musician, actor, and filmmaker. He is dubbed "il Molleggiato" (the flexible one) because of his dancing.Celentano has released many record albums which have enjoyed enormous commercial and critical success. He is often credited as the author of both the music and lyrics of his songs, although, according to his wife Claudia Mori, sometimes they were written in collaboration with others. Read more on Wikipedia

Adriano Celentano is most famous for his song "Grande, Grande, Grande" which is a cover of the American song "Tutti Frutti."

Among people born in 1938, Adriano Celentano ranks 7. Before him are Kofi Annan, Juan Carlos I of Spain, Romy Schneider, Beatrix of the Netherlands, Claudia Cardinale, and Rudolf Nureyev. After him are Jon Voight, Queen Sofía of Spain, Farah Pahlavi, Christopher Lloyd, Nico, and Jerry Brown.