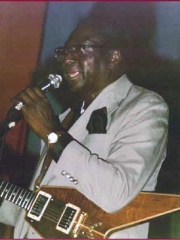 Albert Nelson (April 25, 1923 – December 21, 1992), known by his stage name Albert King, was an American blues guitarist and singer whose playing influenced many other blues guitarists. He is perhaps best known for the popular and influential album Born Under a Bad Sign (1967) and its title track. He, B.B. King, and Freddie King, all unrelated, were known as the "Kings of the Blues." The left-handed King was known for his "deep, dramatic sound that was widely imitated by both blues and rock guitarists."He was once nicknamed "The Velvet Bulldozer" because of his smooth singing and large size–he stood taller than average, with sources reporting 6 ft 4 in (1.93 m) or 6 ft 7 in (2.01 m), and weighed 250 lb (110 kg)–and also because he drove a bulldozer in one of his day jobs early in his career.King was inducted into the Blues Hall of Fame in 1983. Read more on Wikipedia