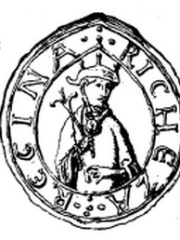 Richeza of Lotharingia (also called Richenza, Rixa, Ryksa; born about 995/1000 – 21 March 1063) was a member of the Ezzonen dynasty who became queen of Poland as the wife of Mieszko II Lambert. Her Polish marriage was arranged to strengthen the ties between Mieszko and her uncle Emperor Otto III. She returned to Germany following the deposition of her husband in 1031, either divorcing or separating from him. Upon the death of her brother Duke Otto II of Swabia and the consequent extinction of the male line of her family, Richeza became a nun, worked to preserve the Ezzonen heritage, and funded the restoration of the Abbey of Brauweiler. Read more on Wikipedia

Among politicians, Richeza of Lotharingia ranks 6,778 out of 15,710. Before her are Mayta Cápac, Alexander Gorchakov, Emperor Shirakawa, Frederick V, Duke of Swabia, Ariadne, and Efim Geller. After her are Frederick Casimir Kettler, Frederick William, Prince of Nassau-Weilburg, Barbara Jagiellon, Tetricus II, Pentawer, and John Tristan, Count of Valois.