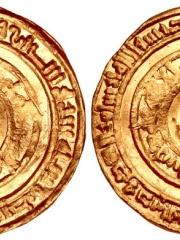 Abu Mansur Nizar (Arabic: أبو منصور نزار, romanized: Abū Manṣūr Nizār; 10 May 955 – 14 October 996), known by his regnal name as al-Aziz Billah (Arabic: العزيز بالله, romanized: al-ʿAzīz biʾllāh, lit. 'the Mighty One through God'), was the fifth caliph of the Fatimid dynasty, from 975 to his death in 996. His reign saw the capture of Damascus and the Fatimid expansion into the Levant, which brought al-Aziz into conflict with the Byzantine emperor Basil II over control of Aleppo. Read more on Wikipedia

Among people born in 955, Al-Aziz Billah ranks 5. Before him are Otto II, Holy Roman Emperor, Adalbert of Prague, Gyeongjong of Goryeo, and Yaropolk I of Kiev. After him are Arduin of Ivrea and Ælfric of Eynsham. Among people deceased in 996, Al-Aziz Billah ranks 4. Before him are Hugh Capet, Pope John XV, and Richard I of Normandy. After him are Stephen Držislav of Croatia and Odo I, Count of Blois.