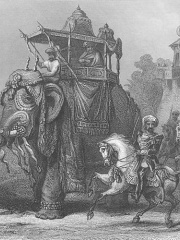 Nana Saheb Peshwa II (19 May 1824 – 24 September 1859), born as Dhondu Pant, was an Indian Peshwa of the Maratha empire, aristocrat and fighter, who led the rebellion in Kanpur (Cawnpore) during the Great Revolt of 1857. As the adopted son of the exiled Maratha Peshwa Baji Rao II, Nana Saheb believed that he was entitled to a pension from the East India Company, but the underlying contractual issues are rather murky. The Company's refusal to continue the pension after his father's death, as well as what he perceived as high-handed policies, led him to join the rebellion. Read more on Wikipedia

Among politicians, Nana Sahib ranks 6,130 out of 15,577. Before him are Theodora, Robert Devereux, 2nd Earl of Essex, Samuel Noah Kramer, Miguel, Duke of Braganza, Urus Khan, and Al-Aziz Billah. After him are Richeza of Lotharingia, Paul Wolfowitz, Brian Cowen, John Henry, Margrave of Moravia, Brennus, and Khải Định.