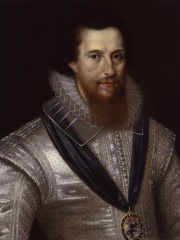 Robert Devereux, 2nd Earl of Essex, KG, PC (; 10 November 1565 – 25 February 1601) was an English nobleman and a favourite of Elizabeth I. Politically ambitious, and a committed general, he was placed under house arrest following a poor campaign in Ireland during the Nine Years' War in 1599. Read more on Wikipedia

Among politicians, Robert Devereux, 2nd Earl of Essex ranks 6,563 out of 15,710. Before him are Kurt Schumacher, Mirsaid Sultan-Galiev, Bolesław IV the Curly, Malcolm I of Scotland, Christian I, Prince of Anhalt-Bernburg, and Friedrich Karl Ludwig, Duke of Schleswig-Holstein-Sonderburg-Beck. After him are Dominique de Villepin, Thorvald Stoltenberg, Étienne Charles de Loménie de Brienne, Fatmir Sejdiu, Anna of Brandenburg, and Gavril Radomir of Bulgaria.