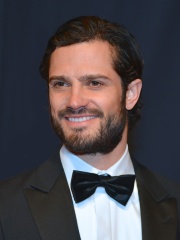 Prince Carl Philip of Sweden, Duke of Värmland (Carl Philip Edmund Bertil; born 13 May 1979) is the only son and the second of three children of King Carl XVI Gustaf and Queen Silvia. As of 2022, Prince Carl Philip is fourth in the line of succession, after his older sister, Crown Princess Victoria, his niece and goddaughter Princess Estelle, and his nephew Prince Oscar. Read more on Wikipedia

Among noblemen, Prince Carl Philip, Duke of Värmland ranks 409 out of 842. Before him are Liudolf, Duke of Swabia, Robert I, Count of Dreux, Prince Ludwig Ferdinand of Bavaria, Princess Clotilde of Saxe-Coburg and Gotha, Beatrice of Silesia, and Humbert III, Count of Savoy. After him are Françoise Madeleine d'Orléans, Margaret Stewart, Dauphine of France, Archduke Ferdinand Karl of Austria, Charles II Gonzaga, Duke of Nevers, William Marshal, 1st Earl of Pembroke, and William III, Landgrave of Thuringia.