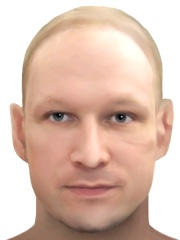 Anders Behring Breivik (Norwegian pronunciation: [ˈɑ̂nːəʂ ˈbêːrɪŋ ˈbræ̂ɪviːk] (listen); born 13 February 1979, known by Fjotolf Hansen legal name, and also known by his Andrew Berwick pseudonym, is a Norwegian terrorist and right-wing extremist who committed the 2011 Norway attacks. On 22 July 2011, he killed eight people by detonating a van bomb amid Regjeringskvartalet in Oslo, then killed 69 participants of a Workers' Youth League (AUF) summer camp in a mass shooting on the island of Utøya. In July 2012, he was convicted of mass murder, causing a fatal explosion, and terrorism.At the age of 16 he was arrested for spraying graffiti on walls; he was not chosen for conscription into Norwegian Armed Forces. Read more on Wikipedia

Anders Behring Breivik is most famous for the terrorist attack he carried out in Norway on July 22, 2011. He killed 77 people and injured 319 people.

Among EXTREMISTS In Norway

Among extremists born in Norway, Anders Behring Breivik ranks 1. After him are Belle Gunness (1859).