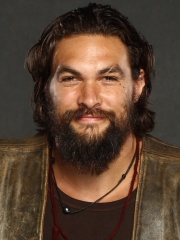 Joseph Jason Namakaeha Momoa (born August 1, 1979) is an American actor and filmmaker. He made his acting debut as Jason Ioane on the syndicated action drama series Baywatch: Hawaii (1999–2001), which was followed by his portraying Ronon Dex on the Syfy science fiction series Stargate Atlantis (2005–2009), Khal Drogo in the first two seasons of the HBO fantasy drama series Game of Thrones (2011–2012), Declan Harp on the Discovery Channel historical drama series Frontier (2016–2018), and Baba Voss on the Apple TV+ science fiction series See (2019–present). Read more on Wikipedia

Independent
Voices: Jason Momoa and Lisa Bonet just gave a masterclass in divorce announcements
It all started with ‘conscious uncoupling’, and now the way celebrities address break-ups is radically different. That’s not necessarily a bad thing
Clémence Michallon
Radaronline.com
Jason Momoa Straddles Hot Rod For Boys' Day Out Following Lisa Bonet Split
The 'Aquaman' star — who announced he is headed to divorce last week — has not been seen with his wife in months.
[email protected] (Ryan Naumann)
Us Weekly
Jason Momoa Spotted Without Wedding Ring After Announcing Lisa Bonet Split
On the move. Jason Momoa was spotted for the first time since news of his split from Lisa Bonet made headlines earlier this month. The Aquaman actor, 42, was seen walking around Los Angeles on Monday, January 17, in photos published by the Daily Mail. In the …
Johnni Macke
Celebitchy.com
Jason Momoa was ‘very chilled’ with his dude friends in London throughout the fall
What kind of gossip are we expecting to come out of Jason Momoa and Lisa Bonet’s split? I think it’s interesting that in the immediate wake of their split announcement, neither party rushed out to give “their side.” Nor did any third party pop up suddenly, a …
Kaiser