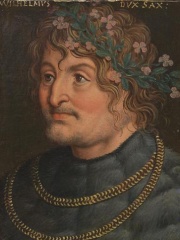 William III (30 April 1425 – 17 September 1482), called the Brave (in German Wilhelm der Tapfere), was landgrave of Thuringia (from 1445) and claimant duke of Luxemburg (from 1457). He is actually the second William to rule Thuringia, and in Luxembourg; he was the third Margrave of Meissen named William. He was a younger son of Frederick I the Warlike, elector of Saxony, and Catherine of Brunswick and Lunenburg. Read more on Wikipedia

Page views of William III, Landgrave of Thuringias by language

Among noblemen, William III, Landgrave of Thuringia ranks 431 out of 843. Before him are Louis, Duke of Vendôme, Archduchess Catherine Renata of Austria, Frederick VIII, Duke of Schleswig-Holstein, Marie Victoire de Noailles, Vespasiano I Gonzaga, and Infanta Amalia of Spain. After him are Prince Augustus Ferdinand of Prussia, Princess Margherita of Bourbon-Parma, Ingegerd of Norway, Henriette of Cleves, Ferdinand the Holy Prince, and Princess Marie Luise Charlotte of Hesse-Kassel.

Among noblemen born in Germany, William III, Landgrave of Thuringia ranks 68. Before him are Wolfgang, Count Palatine of Zweibrücken (1526), Anne Christine of Sulzbach, Princess of Piedmont (1704), Prince Max, Duke in Bavaria (1937), Elisabeth Christine of Brunswick-Wolfenbüttel, Crown Princess of Prussia (1746), Charles I, Duke of Brunswick-Wolfenbüttel (1713), and Frederick August I, Duke of Oldenburg (1711). After him are Prince Augustus Ferdinand of Prussia (1730), Albert II, Duke of Mecklenburg (1318), Friedrich Christian, Margrave of Meissen (1893), Heinz Brandt (1907), Konrad von Thüringen (1206), and Princess Pauline of Württemberg (1810).