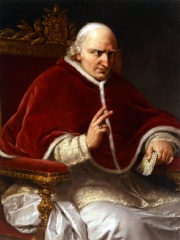 Pope Pius VIII (20 November 1761 – 30 November 1830), born Francesco Saverio Maria Felice Castiglioni, was head of the Catholic Church and ruler of the Papal States from 31 March 1829 to his death in 1830. Pius VIII's pontificate was the shortest of the 19th century, and is likely the least remembered. His brief papacy witnessed the Catholic Emancipation in Great Britain in 1829, which he welcomed, and the July Revolution in France in 1830, which he reluctantly accepted. Read more on Wikipedia

Pope Pius VIII is most famous for his 1864 bull, Quanta Cura, in which he condemned liberalism, socialism, and communism.

Among religious figures, Pope Pius VIII ranks 119 out of 2,272. Before him are Pope Sylvester I, Albertus Magnus, Francis Xavier, Catherine of Siena, Pope Pius VI, and Job. After him are Saint Christopher, Agatha of Sicily, Hassan-i Sabbah, Pope John XXII, Pope Leo XII, and Anselm of Canterbury.