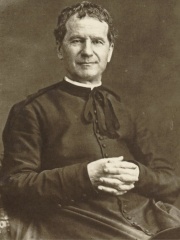 John Melchior Bosco (Italian: Giovanni Melchiorre Bosco; 16 August 1815, Piedmontese: Gioann Melchior Bòsch – 31 January 1888), popularly known as Don Bosco [ˈdɔm ˈbɔsko, bo-], was an Italian Catholic priest, educator, and writer of the 19th century. While working in Turin, where the population suffered many of the ill-effects of industrialization and urbanization, he dedicated his life to the betterment and education of street children, juvenile delinquents, and other disadvantaged youth. He developed teaching methods based on love rather than punishment, a method that became known as the Salesian Preventive System.A follower of the spirituality and philosophy of Francis de Sales, Bosco was an ardent devotee of Mary, mother of Jesus, under the title Mary Help of Christians. Read more on Wikipedia