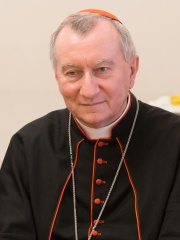 Pietro Parolin (Italian pronunciation: [ˈpjɛːtro paroˈlin], Venetian: [paɾoˈliŋ]; born 17 January 1955) is an Italian prelate of the Catholic Church. A cardinal since February 2014, he has served as the Secretary of State since October 2013 and a member of the Council of Cardinal Advisers since July 2014. Read more on Wikipedia

Among religious figures, Pietro Parolin ranks 978 out of 2,272. Before him are Günter Guillaume, Joanna, wife of Chuza, John of Montecorvino, Hudson Taylor, Valentin Haüy, and Jael. After him are Paula of Rome, Otto of Bamberg, Ascanio Sforza, Antipope Victor IV, Jacques Paul Migne, and Abd al-Rahman ibn Muljam.