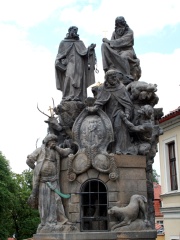 John of Matha, OSST (1160–1213) was a French Catholic priest of and cofounder of the Order of the Most Holy Trinity, initially dedicated to ransoming Christians who had been captured by marauders from North Africa. Read more on Wikipedia

Page views of John of Mathas by language

Among people born in 1150, John of Matha ranks 13. Before him are Canute I of Sweden, Robert IV of Sablé, Roman the Great, Kaykhusraw I, Baldwin V, Count of Hainaut, and Leo I, King of Armenia. After him are Antipope Innocent III, Arnold of Torroja, Jacopo Tiepolo, Bonanno Pisano, Peter II of Bulgaria, and Urraca of Portugal. Among people deceased in 1213, John of Matha ranks 4. Before him are Tamar of Georgia, Peter II of Aragon, and Muhammad al-Nasir. After him are Gertrude of Merania, Maria of Montpellier, Sharaf al-Dīn al-Ṭūsī, William of Winchester, Lord of Lunenburg, Eleanor, Countess of Vermandois, and Guy of Thouars.