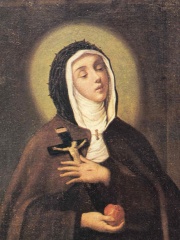 Veronica Giuliani was a nun who lived in the 1400s and was most famous for her work with the plague. She was canonized by Pope Benedict XV in 1920.

Among religious figures, Veronica Giuliani ranks 815 out of 2,272. Before her are Frederick Fleet, Roger Etchegaray, Mammes of Caesarea, Antipope Gregory VIII, Margaret of Hungary, and Tarasios of Constantinople. After her are `Abdu'l-Bahá, Cyril Lucaris, Bavo of Ghent, Wasil ibn Ata, Antoine Perrenot de Granvelle, and Franz Jägerstätter.

Among people born in 1660, Veronica Giuliani ranks 6. Before her are Daniel Defoe, George I of Great Britain, Alessandro Scarlatti, Sarah Churchill, Duchess of Marlborough, and Maria Anna Victoria of Bavaria. After her are André Campra, Johann Kuhnau, Hans Sloane, Andreas Schlüter, Johann Joseph Fux, and Friedrich Hoffmann. Among people deceased in 1727, Veronica Giuliani ranks 5. Before her are Catherine I of Russia, George I of Great Britain, Ismail Ibn Sharif, and Christiane Eberhardine of Brandenburg-Bayreuth. After her are Francesco Gasparini, Francesco Farnese, Duke of Parma, Louis Armand II, Prince of Conti, August Hermann Francke, Aert de Gelder, and Cornelis de Bruijn.