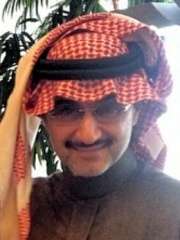 Prince Al-Waleed bin Talal bin Abdulaziz al Saud (Arabic: الوليد بن طلال بن عبدالعزيز آل سعود‎, born 7 March 1955) is a Saudi Arabian businessman, investor and a member of the Saudi royal family. He was listed on Time magazine's Time 100, an annual list of the hundred most influential people in the world, in 2008. Read more on Wikipedia

Since 2007, the English Wikipedia page of Al-Waleed bin Talal has received more than 3,014,622 page views. His biography is available in 31 different languages on Wikipedia making him the 172nd most popular businessperson.