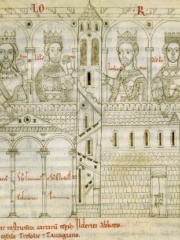 Lambert (c. 880 – 15 October 898) was the King of Italy from 891, Holy Roman Emperor, co-ruling with his father from 892, and Duke of Spoleto and Camerino (as Lambert II) from his father's death in 894. He was the son of Guy III of Spoleto and Ageltrude, born in San Rufino. Read more on Wikipedia

Since 2007, the English Wikipedia page of Lambert of Italy has received more than 36,226 page views. His biography is available in 37 different languages on Wikipedia making him the 3,851st most popular politician.

Page views of Lambert of Italies by language

Among politicians, Lambert of Italy ranks 3,829 out of 14,801. Before him are Stefan Dragutin, Archduchess Elisabeth Franziska of Austria, Stephen II, Ban of Bosnia, Oskar Potiorek, Moïse Tshombe, and Emperor Wenzong of Tang. After him are Thorbjørn Jagland, Benigno Aquino Jr., Gyula Horn, Enmebaragesi, Al-Muqtadir, and Osvaldo Dorticós Torrado.