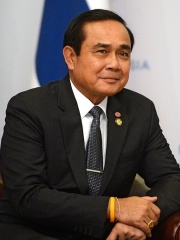 Prayut Chan-o-cha (sometimes spelled Prayuth Chan-ocha; Thai: ประยุทธ์ จันทร์โอชา, pronounced [prā.jút tɕān.ʔōː.tɕʰāː]; born 21 March 1954) is a Thai politician and a retired Royal Thai Army general officer, serving as Prime Minister of Thailand since 2014 and Minister of Defence since 2019. Prayut served as chief of the Thai army from 2010 to 2014 and was the leader of a coup d'etat which installed the National Council for Peace and Order (NCPO), the military junta which governed Thailand between 22 May 2014 and 10 July 2019. After his appointment as army chief in 2010, Prayut was characterised as a royalist and an opponent of former prime minister Thaksin Shinawatra. Read more on Wikipedia

Among politicians, Prayut Chan-o-cha ranks 4,878 out of 15,710. Before him are Princess Maria of Greece and Denmark, Emperor Buretsu, Rusa I, Publius Cornelius Dolabella, Liudolf, Duke of Saxony, and Isabel Neville, Duchess of Clarence. After him are Bernard of Italy, Francis II, Duke of Lorraine, Al-Qadir, Saad Zaghloul, Verginia, and Franz Mehring.