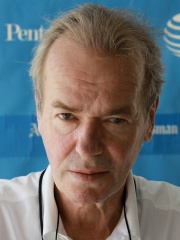 Martin Louis Amis (born 25 August 1949) is a British novelist, essayist, memoirist, and screenwriter. He is best known for his novels Money (1984) and London Fields (1989). He received the James Tait Black Memorial Prize for his memoir Experience and has been listed for the Booker Prize twice (shortlisted in 1991 for Time's Arrow and longlisted in 2003 for Yellow Dog). Read more on Wikipedia

Among writers, Martin Amis ranks 3,765 out of 5,794. Before him are Andrey Kurkov, U. R. Ananthamurthy, Tad Williams, Graham Swift, Mikhail Isakovsky, and Hitoshi Igarashi. After him are Kim Hyon-hui, Yrsa Sigurðardóttir, Enrique Vila-Matas, Mykola Bazhan, Žemaitė, and François Cavanna.