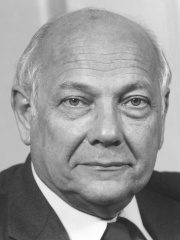 Johannes Marten den Uijl, better known as Joop den Uyl (Dutch: [ˈjoːb dən ˈœyl] (listen); 9 August 1919 – 24 December 1987) was a Dutch politician and economist who served as Prime Minister of the Netherlands from 1973 to 1977. He was a member of the Labour Party (PvdA).Den Uyl studied Economics at the University of Amsterdam obtaining a Master of Economics degree and worked as a civil servant at the Ministry of Economic Affairs from February 1942 until May 1945 and as a journalist and editor for Het Parool and Vrij Nederland from May 1945 until January 1949. Den Uyl served as director of the Wiardi Beckman Foundation from January 1949 until June 1963. Read more on Wikipedia

Among politicians, Joop den Uyl ranks 7,386 out of 15,577. Before him are Ernest, Margrave of Austria, Pascal Lissouba, Al-Mustadi, Alexander Ankvab, Guido Cantelli, and Fulk I, Count of Anjou. After him are Ronald Inglehart, Julius Dorpmüller, Guðni Th. Jóhannesson, Ahmed Shafik, Adelaide of Paris, and Prince Rupert of the Rhine.