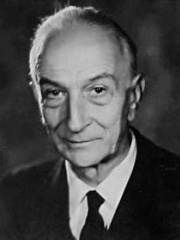 Antonio Segni (Italian pronunciation: [anˈtɔːnjo ˈseɲɲi]; 2 February 1891 – 1 December 1972) was an Italian politician and statesman who served as fourth president of Italy from May 1962 to December 1964 and the 34th prime minister in two distinct terms between 1955 and 1960.A member of the centrist Christian Democracy, Segni held numerous prominent offices in Italy's post-war period, serving as Minister of Foreign Affairs, Interior, Defence, Agriculture and Public Education. He was the first Sardinian ever to become head of state and government. Read more on Wikipedia

Among politicians, Antonio Segni ranks 4,590 out of 15,710. Before him are Aristides Pereira, Cynisca, Tancredo Neves, Honoré IV, Prince of Monaco, Bahram IV, and Princess Henrietta of Nassau-Weilburg. After him are Gabriel Bonnot de Mably, Ōkuma Shigenobu, 9th Dalai Lama, Henry IV, Duke of Saxony, Prince Nicholas of Greece and Denmark, and Al-Mu'tadid.