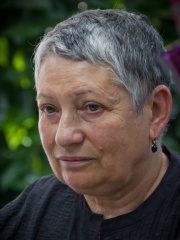 Lyudmila Evgenyevna Ulitskaya (Russian: Людмила Евгеньевна Улицкая, born February 21, 1943) is an internationally acclaimed modern Russian novelist and short-story writer who, in 2014, was awarded the prestigious Austrian State Prize for European Literature for her oeuvre. In 2006 she published Daniel Stein, Interpreter (Даниэль Штайн, переводчик), a novel dealing with the Holocaust and the need for reconciliation between Judaism, Christianity, and Islam. Ulitskaya herself belongs to a group of people formed by the realities of the former Soviet Union, who see themselves racially and culturally as Jews, while having adopted Christianity as their religion. Read more on Wikipedia