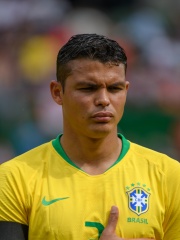 Thiago Emiliano da Silva (born 22 September 1984) is a Brazilian professional footballer who plays as a centre-back for Premier League club Chelsea and captains the Brazil national team. Considered one of the best defenders in the world and one of the greatest of all time, he is known for his defensive prowess, discipline, and leadership.Silva began his senior club career in 2002 playing as a midfielder for RS Futebol, and transitioned to a defensive position while at Juventude; he then signed with Porto in 2004, at age 19, and moved to Dynamo Moscow on loan, where he was hospitalized with a near fatal bout of tuberculosis. After recovering, he joined Fluminense and won a Copa do Brasil. Read more on Wikipedia